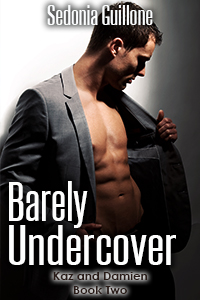 Kaz has been a jerk. Afraid to tell his long time lover about a health concern, instead, he makes a bunch of excuses about going undercover and makes himself rather scarce. When a case forces him to turn to Damien for help, he knows he finally needs to tell his lover the truth. Damien knows the love of his life wouldn’t just run out on him. Something is wrong. Even though he’s pissed, he wants his man back and when Kaz shows up to ask for help, Damien is determined to get the truth out of him, even if it means restraining him (in a sexy way) until he comes clean!

Publisher’s note: This book was previously published at Ellora’s Cave in 2007.

“Finally, dammit.” Kaz pressed the search warrant between his fingertips.

His informant had come through and the judge had supported Kaz’s affidavit of probable cause. As if there were any question that two indirect purchases made by Collins on the premises of Club Moritz would constitute probable cause. According to what Collins was able to glean, there was supposedly a shipment being stored in the club. In that case, Brady was using the Moritz to store and sell millions of dollars worth of cocaine and Kaz needed to take him down before he made the area unsafe.

Kaz could practically taste the end of this investigation. After six months of painstaking work, time and money spent on Collins—a former male prostitute with a record who was willing to trade information to escape arrest—a bust was within reach.

Well, almost. There was one little obstacle.

Kaz carefully folded the warrant and slipped it into his jacket pocket. He sat at his desk, the open case folder spread before him. The question remained of what was the most effective way to infiltrate the club and search for the stash without alerting Brady to a police presence.

Deep in thought, Kaz tapped his pen against his forehead while the phones and murmured voices droned on in the background of District A-1, Drug Control Unit of the Boston Police Department. There were several possible ways to infiltrate Club Moritz, but he had to pick the one that was the least risky both to the club’s patrons and to himself.

Club Moritz was a high-end gay nightclub famed for the hottest male strippers and dancers to show skin…lots of skin. Kaz had been to the place a few times in his younger years—not that thirty-eight was that old—and had met Damien there.

Well, met was not exactly the right word. Fallen head-over-heels, too-deep-to-get-out kind of love was more the way he’d put it. One glance up at that stage had done it. The show had just started and Damien writhed and slunk his way on. Of course, all the guys up there had been hot, but Kaz had gotten an instant hard-on watching Damien. Something about the guy, his sleek, muscular body, the delicious trail of chestnut hair down the center of his tight abs, that perfect ass and…well…killer green eyes, had made Kaz an instant love slave.

Kaz bit down on the end of his pen. He sighed and shifted in his seat. Don’t go there. Thinking of Damien was the only thing that ever distracted him from his usual bulldog way of grasping a case and working on it obsessively to the finish. Just picturing the guy in his mind made Kaz’s cock tingle.

After several more moments of considering, Kaz decided that undercover was definitely the correct track. He sketched a quick list of possibilities and went down the line. He could pose as a buyer, make a couple of direct purchases and then raid the place. No. He scratched that off the list. Cocaine and guns always went together. The club was on Tremont Street, a busy area and Kaz refused to jeopardize the lives of innocent bystanders who could get caught in possible crossfire.

Next possibility. Have his insider make some indirect purchases and try to find out where the stuff was stored. Then, when Kaz had enough evidence built up, stage a raid. Kaz scratched that one off too. It was too risky and too complicated to get an informant that involved in this particular case. One bad move and Brady and his goons would clear the place of every kilo before Kaz had a chance to set foot in there. All of Kaz’s work would be gone and he’d have to start again from square one.

Next choice. Bartender? He scratched it right off. He only knew how to make a few drinks and to learn enough about cocktail making to look natural would take time and energy he didn’t have.
Bouncer. Scratch. The position would familiarize him with the faces going into the place but wouldn’t allow him enough time inside to search.

Kaz raked a hand through his hair. That he could do. He was athletic enough and had the muscular build needed to be considered attractive enough to show it off. And, with a little coaching, he could learn the moves that would make him a convincing stripper.

His heartbeat sped up a bit and butterflies kicked up in his gut. There was only one person he knew of who could teach him in a pinch how to be a male stripper.

Yeah, and that same one person came with a big problem.

Kaz sighed again. He went to scratch the word stripper off his list and paused, pen hovering above the paper. His mind flickered over the other possibilities again. Each one came up sorely lacking. Stripper was the only one that really worked.

He had no choice. He had to move as quickly as possible and search the place before Brady had a chance to move his inventory elsewhere.

Kaz’s stomach tightened and he checked his watch. If Damien still taught English at the University of Massachusetts Boston campus, he was probably in class right now. Barely a few minutes’ drive away. Kaz sighed again and rose heavily from his desk. He’d have to take a chance that Damien loved him enough to hear him out.