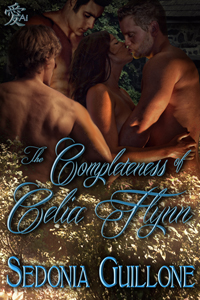 No sooner had she done so, however, than the war took all the young men from the village, including her acceptable fiancé. Two years of loneliness make Celia realize how much she needs and loves the three men she once ran from and vows that if life gives her a second chance, she’ll take it. When her prayers are answered and Robert, Patrick and Freddie return, each needing the love only she can give, Celia gives it, body and soul.

Publisher’s Notes: This book contains sexual content that may be offensive to some readers: m/m/m/f ménage and has been previously published.

As she’d done a thousand times in the past seven years, Celia lay back on the straw, enjoying the feel of Robert’s dark head resting on her stomach. She watched him leisurely twiddling a piece of straw between his teeth. Freddie and Patrick were on either side of her, their heads close to hers.

Yet somehow, this time, something was … different. Her heart pumped harder than usual and her blood ran like liquid fire through her veins.

There seemed no better way to spend her nineteenth birthday than here in the abandoned barn of Robert’s family’s farm, staring up at the rafters, surrounded by her three best childhood friends.
Except that something was happening to her. The sensation of it was like falling. Only she was lying on her back.

She reached out and touched Robert’s dark hair. It was so soft under her fingertips.

Celia’s breath caught softly. The feel of his hair under her fingertips resonated deep inside her, stirring deep vibrations between her thighs. She lifted her hand from Robert’s head as if he were on fire.

He seemed not to notice.

She glanced to either side of her. Patrick held his notebook, deep in the act of composing a new poem. All his poems were about her, she realized with a blinding flash. So blind she’d been all this time. His sandy brown hair invited her touch as well. She resisted.

And Freddie, to her other side, had just a few days ago described to her his ideal woman. She hadn’t registered what he was saying then, but the description of a slim willowy girl with pale freckled skin and waves of dark long hair had fit her to perfection.

None of the three lads, now in their twentieth years, seemed to be on the search for girlfriends, always content to be with her. Nor was she looking, either. She was never happier than she was with her three friends.

Friends! What were they then that they caused her to feel this way? These sensations ripped through her body, making her want each one of them in her arms, inside her, their lips against hers?

She felt suddenly surrounded, not by her playmates, but by grown men. The pulsing between her legs rose to a pitch and her breasts tingled, her nipples tightening. She suddenly wanted Robert to hold her and kiss her, to explore her with his hands and mouth. In fact, she wanted the same from Patrick and Freddie.

Fear gripped her in that moment. Her skin prickled with its icy touch and her heart set to rioting in her chest as she realized the truth. She loved all three men. They were her life.
Terrified, Celia wondered if Freddie or Patrick or Robert had noticed her crash into womanhood. Her breasts rose and fell heavily with her ragged breathing, and she sought desperately to recapture childhood.

Suddenly, the fact that she’d been waiting for them to wish her happy birthday went from being an annoyance to a lifesaving topic of conversation.

“All three of you forgot my birthday, it seems,” she said in a tight voice.
Robert sat up, looking at her sheepishly. “Oh, Celia. I’m so sorry! Was it today? I’ll make it up to you, I swear.”

Freddie sat up now also. “I’m sorry, too, Ceil.” He was equally as sheepish.

Celia sat up and looked at Patrick, who had now risen up on his elbows. He regarded her shamefacedly. “You should have given us warning. We would have been prepared.”

Celia swatted his arm. “I can’t believe you!” Her cheeks burned with her indignation. “I’ve never forgotten any of your birthdays! In ten years of friendship, not once. And this is what it comes to, then, eh?” She looked again at Robert, whose sheepish smile had turned to mischief. A funny tickly feeling fluttered in her stomach. She looked from one man to the next, seeing they all wore the same mischievous look now. A tiny smile teased the corners of her lips. “What’s going on, then?”

Robert’s dark eyes flickered in the others’ directions just before the three of them burst into raucous laughter. They jostled Celia gently around, tickling and tumbling her until her hair was mussed and her face flushed bright pink. Finally, when she was nearly breathless, they stopped and let her up.

“We had you going there for a bit, didn’t we?” Patrick said, laughing.

Celia, feeling sheepish herself, smiled as she picked bits of straw out of her messy hair. “I’m sorry. I should have had more faith. But we’d been here forever, and no one said a word!”
Robert grinned and poked at her ribs. “It wouldn’a worked so well, now, would it, if we had?”
Celia crossed her arms protectively over her ribs as she laughed. “No, I suppose not.”

Robert reached into the pocket of his trousers and pulled out a small box, which he handed to her. “The three of us chipped in for this. Freddie got it in Dublin.”

Celia fingered the small red velvet box, the kind that came from a jeweler. “What’s this?” she asked in a whisper as her heart began to jump.

Gingerly, Celia lifted the lid, catching her breath when she saw what was inside. A delicate gold chain with a heart pendant nestled in the satiny folds of the box. “I can’t believe it!” She stared at the lovely charm, her heart feeling fuzzy and sweet in her chest. “It’s so beautiful!” She looked up, her gaze passing to each man’s face. They were watching her expectantly.

Celia smiled. “All right.” Delicately she lifted the necklace from the box. Robert reached out and offered to help her. She lifted her hair up while he fastened it at the nape of her neck, his fingertips brushing her skin as he did so. Celia shivered lightly at his touch.

She let her hair down and touched her fingertips to the gold heart now resting against her dress, just under the hollow of her throat. She smiled at them. “Thank you all so much,” she said. “This is the most beautiful present I’ve ever gotten.”

“I’m glad, Ceil.” Freddie leaned over and embraced her.

In Freddie’s arms, Celia felt the change again, that acute awareness of her three masculine companions. Freddie felt warm and strong in her arms and a strange, languid weakness came over her.

Pubished author of lgbt and m/f romance. Ghostwriter and editor with fifteen years' experience. Publisher of two imprints, Ai Press for romance and Kokoro Press for mainstream, gay fiction, spiritual and memoirs.
View all posts by Sedonia Guillone →
This entry was posted in Available Books, Sedonia Guillone. Bookmark the permalink.

3 Responses to Now available: the Completeness of Celia Flynn